I bought my first EOS (620) in 1996 second hand from a friend. I loved the camera and shot like hell with it, never with problems. Only hours after I had taken in December 1998 Faith, hope, love (exhibition Two Americas: Part I) the camera literally burnt in my hands, after millions of liters of water was pouring onto us sitting on a high-speed rubber boat under the Cataratas Iguaçu, as I hadn’t taken into account how fast the boat and his driver really were and hence I hadn’t completed the putting my two cameras into a plastic bag. Well actually, that didn’t kill the body, it was the very fact that this body was just out of film, and the film automated rewound PLUS water on that didn’t mix, I’m pretty sure. Thank God / gods (which ones?), I thought, I still have this Canon EOS A2E (= EOS 5, and better sealed body structure as well, yes) that I just bought brand new in Mexico City less than two months earlier (with my life hanging on a user..) was not out of film that moment, whilst bagging (wrapping around – faster) the two cameras at unforgettably less than light speed into plastic bags I had on my knees.

Of course, I wouldn’t tell you this story here and now, if my “there is always hope” thinking would not been any better. Namely, the very next day, as I was returning by bus back to my hotel in Asunción (Paraguay) from the short trip to Cataratas Iguaçu situating upon three countries and with two boarder checks on the way, I was indeed taken by the humidity and warmth of the climate with my too heavy (yet left overs in Paraguay, I think) rug sacks and made the worst mistake of life. I took my overblown fanny bag off my waist, and taking all the seats in the last seat row with my “small” luggage. As I was the (only one, of course, what do you expect!) foreigner and tourist around, I had to go thru the customs and again another one, whilst the bus with other passengers drove by. I got to the same bus (standing in the front) after the first boarder, but in the second customs I stayed in longer and sure my bus was long gone. And so was my fanny bag, inside which were the little used Canon EOS A2E and the EF 28-105 zoom lens that I used only half a roll worth. I as recognized this fact, my life ended and but soon started again, me at first bargaining the price of a taxi driver (stupid! lost my time there!) in order to get to the bus depot, but there to recognize that the buses drove the whole day along a loop between the two boarders of Paraguay and Brazil. So, hell yes, I was in the wrong place and off we drove to the bus terminal, where I could see tens or more of these look-a-like buses. So yes, I spent until sundown chasing all the buses at the boarder looking for God. Yes, literally. The bus I used in the first place had a very big sticker on the side stating that God will save you or something like that. Well, that God nor those gods (? which ones?) didn’t save me from my cameras, there we lost forever. Yes, I had still reels of films with me and a journey lasting for many weeks (ultimately), and certainly had I no interest in buying another (semi-)pro Canon body in these South-American countries I was: the most expensive one could imagine. No, they were no second hand cameras available me suiting and with a price likewise, I did check all the places I could find. Yes, I bought the single-use cameras, and yes, I tried to reload film into them, and no, it didn’t succeed as the plastic was so cheapo that screws could not be re-screwed again to hold. So, I finally bought a full plastic HOLGA to shoot with in Aconcagua, but that’s another story of why I didn’t die there, on this one 4.5 months journey of mine. [Yes, I have a book about my travels in the Two Americas which will blow our mind (the truth will set you free.. no sorry, truth is stranger than fiction), but it’s all about the money, not the photos, you know. 🙁 ]

As I was finally getting back from my trip to Finland, pretty much all broke and with +7000 film shots taken (and only partly posted back home) and all cameras busted, gone in the air or stolen, I made a stop to Germany with all my old new climbing gear and almost got arrested by looking too much a weirdo and a terrorist. Of course, in Berlin this was never the case later on. 😉 So I got myself another brand new EOS 5 in Munich (4. 2. 1999) and scared the shit out of my relatives and friends with my travel stories.

What I am selling here is not the EOS 5 one from Mexico City (shit, where did it go and who has it?!) nor the one from Munich (that one got busted as well), but another EOS 5 that got second hand before 2002 in Finland in a professional photo store. If you ask when, I can’t really say and please don’t ask me remember all my camera acquisitions, this is already bad enough as it is. But I do have the boxes left from Mexico City and Germany, so there I go with these camera auctions! 🙂

What I can tell you about this particular camera body is not much. It has the date (quartz) back, but I don’t think I have never used the date function and I’m not even sure if and how it works. If this is something important for you, I will of course check that matter before making the transaction. I don’t think I have used this camera not much at all according to my standards, as at the time around 2003 I already had more cameras than fingers to use them on.. 😉

The EOS 5 camera bodies were, next to my trusty 620, those cameras that I used by far the most regarding exposures taken . The counts would have been in several tens of thousands, which is not much in our digital era, but with film (36 exposures per roll, 3 per hundred, 300 per 10 k..) this is already something else. I obviously liked the body: it was light to carry, worked well in the Amazons and high Alps and anything between (besides the battery would “freeze”) and taking lots of photos in short time was no problem. Taking a thousand shots automated or semi-automated (as I did) would be, indeed something else with fully manual and mechanic camera. Sure, it is not about the amount of photos you take, but if you would be, say one day in Macchu Picchu of your life and that’s it, then you’d probably would not like to concentrate on the act of photography itself (as you would with say large format shooting) but in documenting the place (before it plunderers down to the ground zero or whatever).

The EOS 5 has a built-in flash, which will eat your lithium battery in a flash (or in several flashes..). To make better vertical photos you need the vertical grip VG-10 which I have also for sale, lucky you. 🙂 Yes, there are of course reviews on the camera, which you probably would also like read before you buy this item.

I tested this camera on February 2016 with my vertical grip VG-10 and two different lenses and I found no problem with it. The only problem was with me, and that is the reason I’m selling it. Yes, I have also lenses that do not work with autofocus and in that case the pretty good autofocus of the body does not help me at all.

With great reluctance I am selling this very nice camera body in auction, starting 1 euros, with reserve and buy it now 100 euros, shipping only to be done fully insured, local pickup and testing welcome. You get the lithium battery (expired) that I opened from it box for camera testing as a free extra, as well as the Canon strap.

I am no camera selling professional and am not officially qualified to judge the condition of this camera body. I have checked the camera (with lenses) and I haven’t noted anything in malfunction. Cosmetically it is as you see from the photos. I have marked it good condition, as stating “very good” would be, I believe be too much, although in eBay there might be many to state that.

Remember if you buy outside EU and you are in EU, you need to pay customs tax (typically ca. 5 %) and VAT (typically around 20 – 25 %) which are added on top of shipping and insurance costs. To my understanding, these costs are calculated and due regardless of the age and condition of the item! There are calculators on-line for this, like from Pitney Bowes. 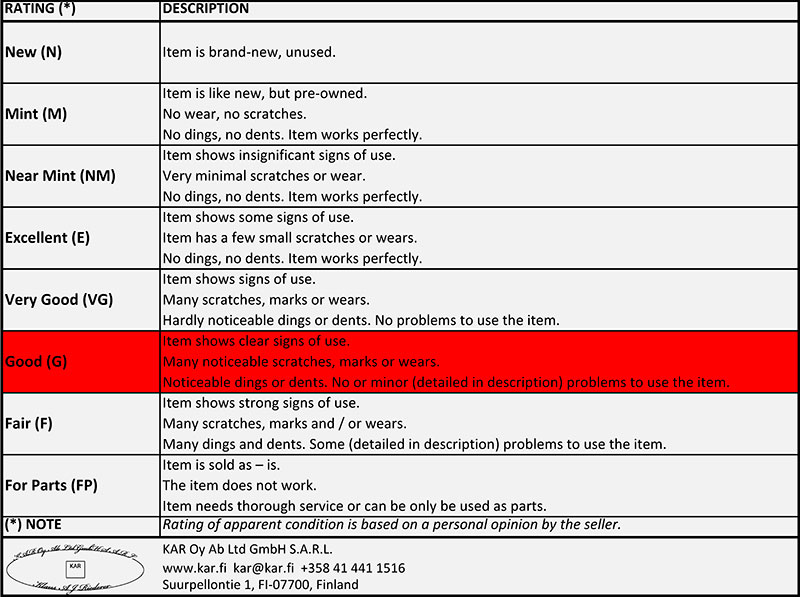 Auction failed because there were no bids